Materials donated to the law school by General Eugene Phillips. 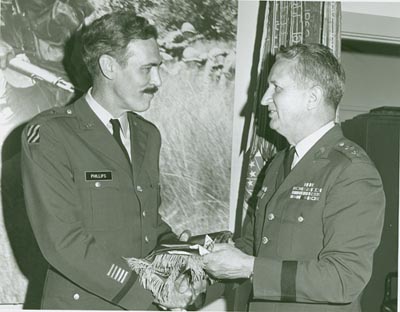 Eugene Phillips is a Franklin County native (born in Canon) whose family has resided in Georgia since 1799. His great-great-great grandfather was a soldier in the American Revolution, and both of his great-grandfathers were soldiers in the Confederate Army.

He grew up on a farm in the Sandy Cross Community six miles west of Royston and graduated from Royston High School (1935) as valedictorian of his class before attending the University of Georgia (ABJ 1939). Commissioned a Second Lieutenant of Horse Cavalry from ROTC, he is one of 15 University of Georgia graduates to attain general officer rank in the Armed Forces. Before entering the Army he was a newspaper reporter.

Phillips attended many Army schools, including the Cavalry School, Armor School, Command and General Staff College, and the National War College. He served in numerous assignments around the world, having been stationed or traveled in 30 countries. Retired in 1977 as a brigadier general, he was a partner in a Washington, D.C. public relations counseling firm before returning home to Georgia in 1984. He has served frequently as a consultant to U.S. government agencies.

Married to the former Nadine Barnts of Springfield, Missouri, he is the father of Thomas E.B. Phillips, who is a 1978 graduate of the University of Georgia (ABJ), and M.A. 1980.

He retired to Royston and was honored by the city for his lifelong contributions to the community and the country. General Phillips passed away on Dec. 25, 2014.

NURNBERG, Germany, June --. - The University of Georgia is one of 12 repositories in the United States where complete records of the Nurnberg war crimes trials will be permanently available for study and reference.

Brigadier General Telford Taylor, U.S. Chief of Counsel for War Crimes, announced that duplicate copies of all official records of the war crimes Tribunals records have been sent to the library of the University Law School.

Original court archives will be stored in the Library of Congress in Washington.

Law School and other University of Georgia students will also have access to a 50-volume printed set of the official records of the International Military Tribunal, which sentenced Hermann Goering and other top Hitler aides to death for war crimes, and a 15-volume set of records of the 12 subsequent trials prosecuted by General Taylor.

The legal records were presented to the University by Maj. Eugene Phillips, Military Government public information chief, who is a 1939 graduate of the Henry W. Grady School of Journalism. Chancellor Harmon W. Caldwell accepted the war crimes volumes on behalf of the University. After cataloguing, the collection of Nurnberg documents will be displayed on a special shelf in the University Law School Library.

Dean J. Alton Hosch of the Law School, in a letter to Maj. Phillips said: "The School of Law certainly appreciates your interest in sending us these valuable documents. In time they may be a large part of the developing jurisprudence of the future. To that end, we shall cherish and preserve them."