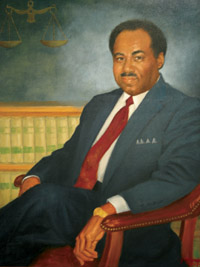 1967 - graduates from Tuskegee University with a B.S. in Political Science

1970 - earns a J.D. from the University of Georgia School of Law, the second African-American graduate. While at UGA, he was a member of the Demosthenian Literary Society.

1989 - appointed by Governor Harris to the Supreme Court of Georgia. Benham wins the statewide election to a full term in 1990. Earns an L.L.M from the University of Virginia

2006 - honored by the University of Georgia Alumni Association with its Alumni Merit Award, which recognizes UGA graduates for lifetime loyalty and support of the university and the Alumni Association, as well as professional leadership.